Modulous, a U.K. startup that makes it easier for housing developers, architects and construction firms to configure and design modular homes to address the ongoing housing crisis, has raised £10 million ($11.7 million) in a series A round of funding.

Founded out of London in 2018, Modulous said that it’s seeking to tackle a global housing shortage that could impact some 1.6 billion people by 2025, as house-price growth continues to outpace income growth. On top of that, houses aren’t being built quickly enough, with an estimated shortfall of at least 4 million homes in England and 5 million in the U.S.

Modulous aim to address this through a software platform that automates the design, costing, and programming of modular homes, while saving its customers from having to set up a physical factory — this is among the most capital-intensive elements of off-site housing development. The platform also promises to help circumvent the typically antiquated and fragmented construction processes using software-based logistics orchestration, ensuring that all the parts and components arrive at the right time, in the right order.

Modulous’s “end-to-end” platform spans all the core areas that constitute the home-building process, including architecture and design. The software generates optimized designs and “massing” (i.e. the full 3D shape and form) specific to each building site, and is based on its proprietary “kit of parts” which are standardized components procured from the construction supply chain and brought together to create buildings.

For the construction phase, the kit of parts enables developers to produce large multi-tenant apartment blocks with minimal up-front investment. Rather than having to set up costly factories in remote locations, its supply chain partners deliver “sub-assemblies” to facilities close to the building site.

For planners, Modulous produces 3D visualizations and detailed costings up front, giving everyone real-time data on their return on investments (ROI). And it also helps everyone involved in a housing project establish the technical feasibility of a proposed development in a matter of hours, rather than weeks. 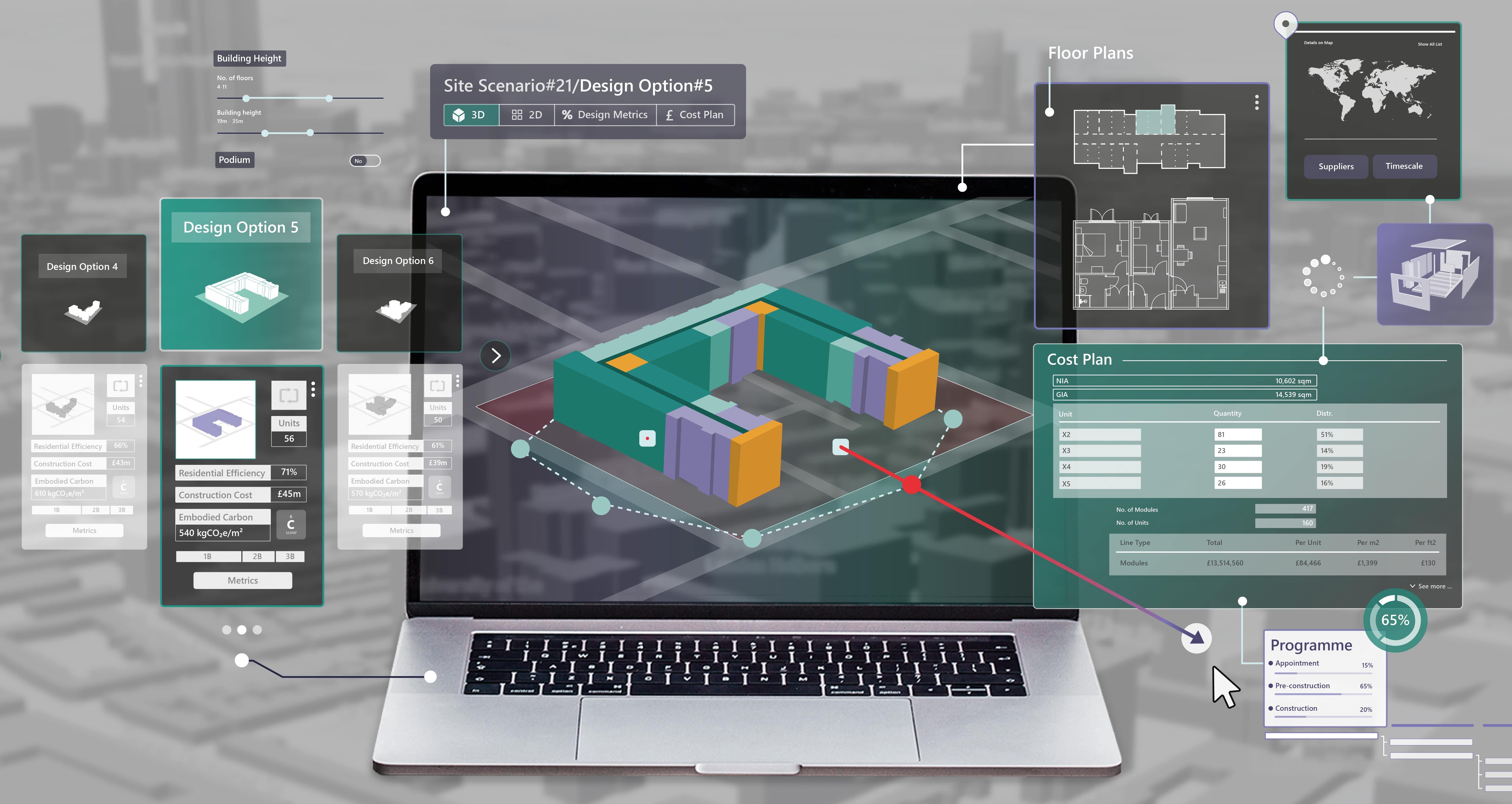 The upshot of all this is that companies simply have to lease a temporary assembly space close to a building site, rather than paying for the upkeep of a permanent factory that may be miles away from where a build is taking place. On top of that, this also allows companies to hire workers locally.

“Our distributed assembly process is enabled by the degree of engineering that has gone into our Kit of Parts, pushing manufacturing complexity upstream to our supply chain partners,” a Modulous spokesperson told TechCrunch. “This enables our delivery partners to lease space on a temporary basis close to the final site and to use local labour to assemble the Kit into volumetric modules at a fraction of the cost of setting up a dedicated manufacturing facility.”

Modular and prefabricated housing startups have emerged as a notable trend in the construction tech space, with the likes of Veev recently closing a $400 million funding round in the U.S. Elsewhere in the U.S., both Cover and Abodu have raised sizable investments over the past year to advance their modular housing businesses, while London-based TopHat secured £75 million ($87.5 million) from Goldman Sachs.

Collectively, these companies go some way toward addressing the housing shortage by using technology to modernize a sector that is often regarded as one of the least efficient and digitally-averse industries. But modular housing promises much more than simply enabling builders to erect houses more quickly and cheaply — it’s also partly about addressing climate concerns by making the building process more efficient and trackable. Indeed, modular homes are substantively built in controlled, off-site environments, while the assembly-line approach means less material waste. On top of that, digitizing housing development processes makes it easier to track all the components involved in a construction, which in turn makes it easier to measure and calculate carbon output for each project.

“Building energy efficient, affordable housing without the waste and carbon footprint that accompanies traditional construction has never been more critical,” Modulous CEO Chris Bone said in a statement. “Modular delivery is really the only way the housing crisis can be resolved, but, for many, the upfront capital investment has held back the industry’s ability to scale. We are keen to prove that by collaborating with each other, the industry can move forward with transparency and cost certainty front and centre.”