UpEquity, a digital mortgage startup that makes all cash offers, secures $50M in debt and equity

UpEquity, a digital mortgage company that makes cash offers on a buyer’s behalf, announced today it has raised $20 million in equity funding and secured $30 in debt financing.

S3 Ventures led the equity raise, which brings the startup’s total funding haul since its 2019 inception to $77 million, with $29.15 million of that in equity. Next Coast Ventures, BP Capital Management, Alumni Ventures, Gaingels, Launchpad Capital and Early Light Ventures also put money in the round.

There are many digital lenders out there (Better.com being among the higher-profile ones). And there are also many companies that will make cash offers on behalf of buyers. But there aren’t many that do both. (We covered the raise of another such startup, Accept.inc, in June).

In an interview with TechCrunch, UpEquity co-founder and CEO Tim Herman said the company has seen 500% year-over-year growth in revenue and transaction volume. He expects that it will originate more than $1 billion in mortgages over the next 12 months. UpEquity has so far worked with “thousands” of buyers.

The startup pledges faster closing times, thanks to its mortgage underwriting technology — saying that it reduces closings from the industry standard of about 50 days to 18, Herman said. Its goal within the next year is to reduce that to an average 10-day close.

The company also claims to offer lower interest rates than other companies in what it describes as the “power buying” space, with no incremental fees. UpEquity, he said, also can turn clients into all-cash buyers so they don’t risk losing a desired home in a competitive situation.

“For the first time in history, single family homes are an institutional asset class,” Herman told TechCrunch. “You have Blackstone and other private equity firms or sovereign wealth funds that are buying full neighborhoods with all-cash offers. And so, in this environment with constrained supply and increased demand, the average American is being excluded from accessing single-family housing, And that’s what we’re here to help solve.” 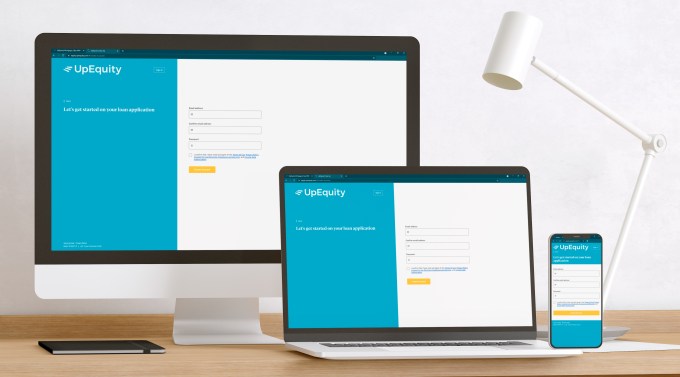 Herman met co-founder Louis Wilson while both were at Harvard Business School. They started the company in the spring of 2019 and participated in Y Combinator’s summer batch that year. UpEquity officially made Austin its home base in 2020. Since then, it has grown its team from about 15 to 90 people.

“If you can automate the underwriting of a mortgage, there’s three things that you can do. You can remove cost from the mortgage, and you can increase speed and add certainty to that mortgage,” Herman said. “And we take that speed and certainty, and use that to create an all-cash offer for our borrowers that we can give them for free.”

Like other lenders, UpEquity makes its revenue on a portion of the interest that a buyer pays over the life of the loan. Not all of its customers take advantage of the company’s ability to make an all-cash offer, but the “vast majority” do, according to Herman.

Overall, Herman said, the mortgage industry has claimed they are going to have a digital mortgage, but “all they have done is put a slick user interface on the front end and poured money into marketing.”

“But then if you look under the hood, it looks like technology from 1985,” he added. “And so, what we think really differentiates us is that we are the only company that has focused our technology on the back end of producing a mortgage.” As such, Herman said, UpEquity’s true competition is not other startups, but the legacy mortgage industry “that has failed to innovate, and is driving such bad user experience to consumers everywhere.”

UpEquity is licensed in Texas, Colorado, Florida, Illinois and Georgia. It plans to expand state by state.

S3 Ventures partner Charlie Plauche, who is taking a board seat as part of the financing, believes the company is solving a “very real, growing” problem in the mortgage industry.

“Large institutional investors are buying up housing inventory at a record pace and winning bids by making all-cash offers and promising quick close times,” he wrote via email. “The average consumer is going to have to be able to make similar offers in order to buy their dream home and UpEquity empowers them to do that with their accelerated close times and all-cash offers.”

Plauche also believes that the company’s ability to make cash offers for buyers for no additional cost helps set it apart.

“Other mortgage companies charge up to 2% on the mortgage for a cash offer option,” he said.